Review of THE HUNGER GAMES, by Suzanne Collins

Second take: Thank god I borrowed the next book from my friend so I can start it tonight!

I read about The Hunger Games in Entertainment Weekly about nine months ago and found the concept incredibly intriguing. Kids fighting to the death on demand of a Capitol entity, as a punishment for the people’s rebellion? What an insanely unique idea for a novel!

Over the summer I vacationed to Aruba; on the plane, a young man of about twenty sat beside me reading the third book in the series, Mockingjay. He barely acknowledged his soda and peanuts as he pored over the book, eventually lowering it to his tray table with a big sigh.

“What did you think?” his girlfriend asked.

“It was incredible,” he breathed.

He then proceeded to go on and on about the book to the point where I finally said, “Um, hey, some of us still haven’t read it. Can you maybe not give away the whole story just yet?” We had a good laugh, and he informed me that he’d been reading the series nonstop over the last few days and simply couldn’t put it down. 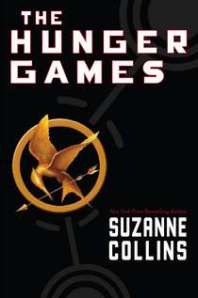 I proudly purchased my copy just after I returned home. Sadly, I got distracted working on Kyresa (okay, that’s not such a sad thing), the school year started, and various other bouts of drama abounded—but I swore I would read that darn book before the movie came out if it killed me. Well, I finished it, and you know what? The kid was right.

From the first page, I refused to put this book down. Narrated by sixteen-year-old Katniss Everdeen, a girl in the poorest District who volunteers in place of her twelve-year-old sister, Hunger Games contains a carefully blended scene of both science fiction and fantasy. Gone is the world we know, replaced instead by a cruel Capitol bent on punishing the people for their past defiance. Katniss is a skilled huntress who has spent her life unintentionally preparing for the Games, by providing for her family since her father’s death. Headstrong, clever, and hosting a keen understanding of the natural world around her, Katniss is a phenomenal teenage heroine. She bravely enters the Gamemakers’ world, hoping to survive the brutality that has reminded the world of their place under the Capitol in a manner vaguely reminiscent of George Orwell’s 1984. Once in the arena, Katniss fights against a collection of terrifying opponents, both human forces and natural elements alike. Meanwhile, she also struggles against an acquaintance from home, the questionable Peeta, with whom she learns a bit about herself as well as her transforming emotions throughout the course of the Games.

Though the book is geared toward a younger audience, any adult can enjoy this book (I personally know of four who can’t stop raving about it). The reading is smooth and intriguing, with rich and engaging characters whose complicated flaws and endearing traits wrap you up in concern as you follow their journey. Even the dangerous, bully teens who seek to snuff the lives of those around them are characters you can’t help but feel sorrow for, as their morals are caught in the Capitol’s inhumane rules and expectations. I had a few flashes back to Connell’s “The Most Dangerous Game” as well as Golding’s Lord of the Flies as I read, though, I have to admit, I took far more pleasure in this read—and I’m a pretty big fan of the aforementioned pieces.

At the gym today, a gentleman asked me how I could move so fast on the elliptical machine while still reading [and clutching] a book. My response?

“Because this book is amazing! You should read it too!”

I’m so excited to read the next book of the series that I’m afraid it’s now time to sign off and read!

(Be sure to check out Suzanne Collins’s website: http://www.suzannecollinsbooks.com/index.htm for more information on the trilogy.)

Eva Rieder is a speculative and contemporary/mainstream fiction author. By day, she masquerades as a high school Math and English teacher. Though she adores teaching and her students very much, when Eva returns home she reglues her fingertips to the keyboard to pursue her alter ego’s destiny. She currently lives and writes in Northern California with her two keyboard-savvy cats. END_OF_DOCUMENT_TOKEN_TO_BE_REPLACED
This entry was posted on Wednesday, March 7th, 2012 at 5:59 pm and tagged with books, Hunger Games, other authors, reviews and posted in Book Reviews. You can follow any responses to this entry through the RSS 2.0 feed.
« But What Does Charity Have to Do with Fantasy?
How Does One Write? »

6 responses to “Review of THE HUNGER GAMES, by Suzanne Collins”