Welcome back! It’s time for the second edition of Third Thursday Flash!

Every three weeks, I am crafting a 500 to 1,000 word flash piece with a theme suggested by you, my fantastic blog readers. If you’d like to participate, keep an eye out for a theme submission call in about two weeks.

Today’s theme is brought to you by Sue W., a wonderful woman I know not only as a blog reader, but also as a friend and colleague. Sue watched a Discovery Channel show on the potential reality of mermaids, and the effects of naval sonar on their existence. I thought the idea sounded great! I’m also a little bummed I missed the show!

But without further ado, thanks to Sue for inspiring…

Annie swept her hair aside, letting it float around her shoulders. The strands followed her like a gentle mist, waves of color that drifted within the lull of the ocean’s whisper. The only break in its sweet hum was the echo of sonar in the distance.

Annie ceased her strokes. She kicked her fins just enough to roll onto her back, then floated in the cloudy depths while Kata took her hand. Her daughter had started to form in the subtle ways of a young woman, her torso growing shapely and her cheekbones more defined. Kata’s lips puckered as she watched the whale pod swimming nearby, their small grey eyes pained by the sonar vibrations that increased each passing day. It would not be long before the noise grew close, driving them from the water as it had the creatures of the past.

Annie tugged Kata’s hand, then used her tail to drive them forward and up. They broke the surface beside the ridge, where the waves crested against the algaed rocks in a white roll of foam. This spot was safe, a place that only she and Kata knew. 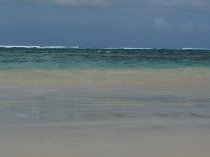 Day-vad, he’d told her then. His name, like his story, was a mystery that swayed her whenever he reappeared.

Kata folded her arms over the rocks. She laid her chin on her forearms, her eyes bluer than the ocean as she gazed across the endless water surface. “He will, right, mama?”

Annie trailed her hand along Kata’s shoulder. The girl’s chest heaved slightly until her gills tucked themselves closed, allowing her to breathe the salty sky air.

“I hope so,” she said. She remembered the day Davad’s giant ship arrived. The moonlight had shined high above them while they anchored, and when he peeked over the edge, she’d known that he was hers to hold.

Once his mates fell to sleep, he’d crawled down to the surface of the reef. There he swung his feet in the ripples of the water, singing a tune so foreign and sweet that Annie had been compelled to surface alongside him.

“You are the most beautiful creature I’ve ever seen,” he’d said.

Under the moonlight, they told each other stories of their lands—or in her case, of the deep waters, the others of her kind, and the torturous sounds of the sonar that ripped through their ears, threatening to send them to the surface.

Where we would not survive.

Davad swore he would find a way. He had promised it every time he came to her, meeting her in the moonlight until her belly swelled high and slowed her strokes in the water. She’d been vulnerable at the depths, but she had survived, as had their beautiful daughter, Kata.

They returned when Kata was old enough to swim the distance and found a bottle caught in the rocky ridge. The note within bore five simple words that she could read.

“We’ve come here every week for years. How many weeks until he comes?” Kata tilted back her head and stared into the sun. “What if he never comes? We will need to find a better place, away from the—”

“He will come,” Annie said. She peered at her daughter. The girl deserved to know the human who had stolen her heart from the warm watery depths.

She flicked her tail repeatedly, sending a spray over their heads until Kata’s stern frown broke into laughter. The sound came out a lovely melody, the same pitch that Annie once used to draw Davad into her arms.

Kata ceased her laughter and pressed her hand to Annie’s cheek. Her eyes reflected the sun setting far away on the horizon. Nothing floated around them save for the driftwood that bobbed as quiet as the looming night sky.

“We will wait as long as you like, mama. But if I have you, I could live beneath the water forever without him.”

Together, they waited for the ship that never came.

Thanks for reading the second edition of Third Thursday Flash. The next edition will be in three weeks, so start thinking of your suggestions. In the meantime, have a great Labor Day weekend! 🙂